The Legislature adjourned Sunday evening on time. It was a 105-day whirlwind of bad bills and misplaced spending priorities for working families in Washington. Leading up the start of 2021 there was expected to be a $6 billion shortfall because of the economic effects of COVID. Not only did the shortfall never materialize, there was a surplus, in addition to federal stimulus relief funds. Did we reduce taxes to give working families a break? No.

The final budget that was adopted increases state spending by over 12% from the previous budget. I encouraged my Republican colleagues to develop our own budget to show we can fund mental health and other valuable safety-net services for vulnerable families. That budget funded the same critical investments without the billions in new taxes. In addition, it fundamentally changed how the state invests in transportation by using the existing sales tax on motor vehicles, resulting in $24 billion for infrastructure needs over the next 16 years. The opposition to the high tax and spend budget was bipartisan. The bill passed by one vote with no Republican support.

I voted against this budget which relies on another attempt to implement an unconstitutional income tax, higher fuel taxes and a convoluted cap and tax carbon pricing scheme. The people have continually voted against an income tax and a carbon tax, yet the majority party relies on those taxes to increase spending in a year when we were unexpectedly flush with tax dollars. All these policies in effect are taking food off your family’s table for special interests in Olympia. 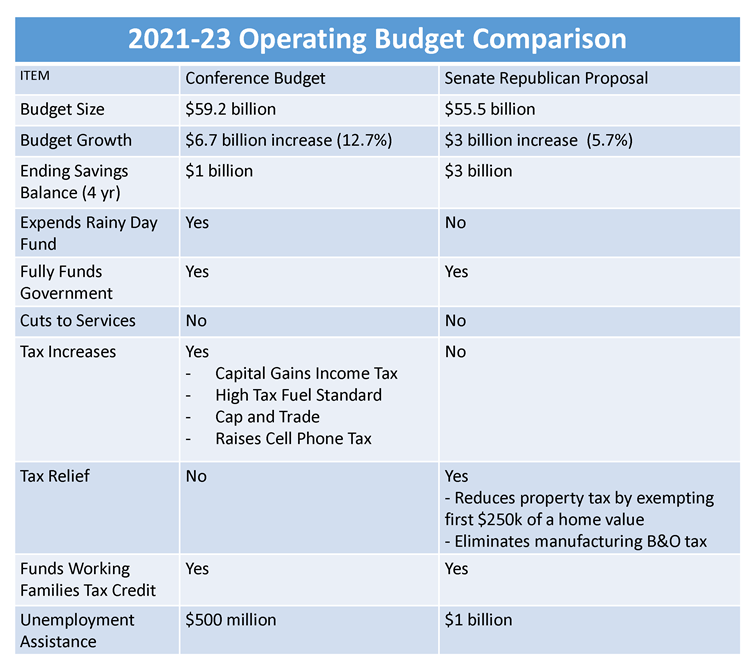 The Lieutenant Governor sent out an adjournment press release Sunday night. In it he made the statement, “The past 105 days will shape Washington for years to come…” Boy, is he right. Washingtonians can look forward to rising costs of fuel and everything else they purchase. Increased taxes for their cell phones, new home purchases and a new income tax “on the rich.”

It started out as a billionaire tax, then multimillionaires, then millionaires. It will soon be a tax on thousandaires, aka working families.

Here is a comparison to the budget that the Senate Republican Caucus proposed and the final budget. It is a clear and stark contrast in priorities.

Throughout the session, I made principled stands and did everything I could to slow down the process and speak up for your rights. Whether it was religious freedom, your Second Amendment rights or reining in the governor’s emergency powers. I’m proud to have help found the Senate Freedom Caucus, which put an even stronger emphasis on policies eroding your personal liberties. I will be holding a virtual town hall on May 12 from 7 to 8:30 p.m. to discuss the 2021 legislative session and answer any questions. Please register in advance for this event by clicking here.

I believe we can and should do all we can do be good stewards of our environment. For my day job, I’m a leading water quality compliance expert in our state. I know firsthand the effects humans have on our environment and the unreasonable regulations imposed on regular people that government can’t even achieve and do little for the environment while driving up costs.

The latest policy is a proposal, Senate Bill 5126, to cap carbon, price it, and sell it. When this bill first came to the Senate floor, I called it a crony capitalism shell game. You’ll be paying more for fuel and consumer goods while businesses will have to pay millions to “buy” credits, adding those costs to you, the consumer, without improving the environment. That’s not a genuine approach to protecting our environment. It’s really a way to take more money from “Main Street” and give it to Olympia special interests that stand to make millions by taking from your paychecks.

As your state Senator, I’m fighting for accountability for programs like this. If we are going to take hundreds of dollars out of your household budget to “protect the environment,” I have to be sure those goals will be achieved. Coming out of a pandemic and the related economic harm, now is not the time to be implementing costly and regressive taxes on the people of Washington.

You can watch my floor speech on it here. The new income tax passed by majority Democrats in the Washington Legislature earned top honors in the first annual Galloping Gertie Awards, presented by the Senate Freedom Caucus to honor the biggest fails of the 2021 legislative session.

The awards are named for “Galloping Gertie,” the famed state-highway bridge that briefly crossed the Tacoma Narrows before it collapsed in a 1940 windstorm. A recording of the Wednesday awards ceremony can be seen on TVW, by clicking here.

Overall, there were so many bills that just ate away at your individual freedom by growing government and taking your tax dollars to pay for it. One big example is the recently passed childcare legislation, the Fair Start for Kids Act. While well intended to give parents some needed support, the fact is that it grows a bloated bureaucracy to subsidize childcare paid for with a new income tax. Why not just allow you to keep more of your money to pay for these necessities the way you want to? Instead, we have a one-size-fits-all approach that requires taxes and regulations that only make the end product more expensive and inefficient. To pay for all these supposedly great things, state government has increased the individual tax burden by 67 percent over the past four budget cycles to $7,732. That is not sustainable.

It is my honor to sponsor local religious leaders in my district to provide the opening prayer during the legislative session at the start of our day’s proceedings. We hit a roadblock when the Lieutenant Governor’s Office rejected prayers because they mentioned Jesus’ name. As it turned out, the Lt. Gov himself was unaware of this practice. I am pleased that a local pastor in our district pushed back and brought this to my attention. You can see his letter and the various opening prayers from those in our district by clicking here.